On this Valentines Day, I'm examining the (not so) secret love lives of galaxies. And by love, I of course mean gravity (they do, after all, share one thing in common... I'll get to that later).

Two galaxies, NGC 5257 and NGC 5258, interact from a distance: a bridge of stars connects them. Image: NASA, ESA, Hubble Heritage (STScI/AURA), A. Evans.

350 million light years from Earth, these spiral galaxies are engaged in what looks like some sort of cosmic dance. A bridge of stars reaches between them, like two lovers clasping hands before the pirouette.

We still don't understand how gravity works on galactic scales. On observation, it doesn't seem as though there should be enough mass in any given galaxy to prevent its stars from flinging off into intergalactic space. That's why we created this obscure notion of dark matter: to help us explain what doesn't make a whole lot of sense.

It's rare to find two galaxies of similar size and shape interacting in such a controlled and peaceful manner. If only all of them could be so civilized...

SOMETIMES, LOVE CAN BE A WHIRLWIND 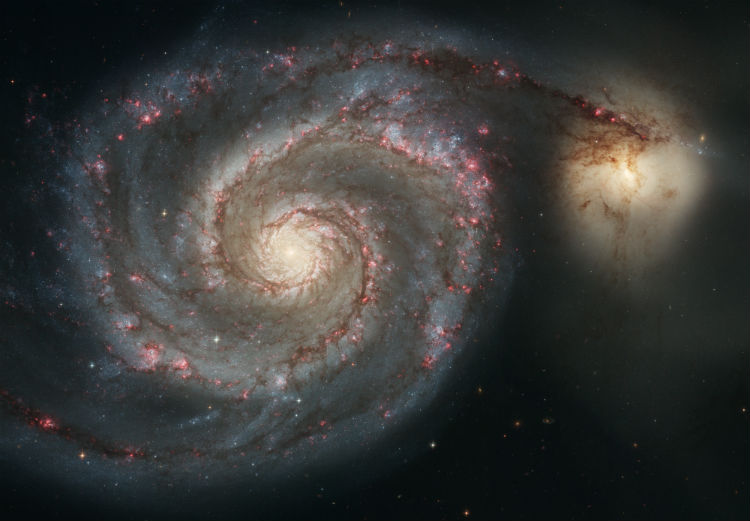 25 million light years from Earth is the majestic Whirlpool Galaxy and its smaller companion. Similarly to the previous two galaxies, these two are connected by a narrow band of gas and dust. But here, as can also be the case in love, looks may be deceiving.

An updated model of gravitation may be able to better explain what we observe in the cosmos. Thus far, this updated model has remained elusive. Instead, we're forced to rely on dark matter, which is said to be five times more plentiful in any given galaxy than all of the 'regular' matter combined. This proposition is a tad strange...

Nevertheless, the gigantic swirls of the spiral galaxy in the foreground do appear to be a result of the gravitational influence of the galaxy in the background. The smaller galaxy has been slowly moving past the larger Whirlpool galaxy for hundreds of millions of years, resulting in the impressive elongated outer arms of the latter.

Sometimes, all it takes is one tiny companion to make the larger partner appear particularly fantastic. Other times, interacting galaxies can be exceedingly violent...

LOVE CAN ALSO BE A SUCKER-PUNCH 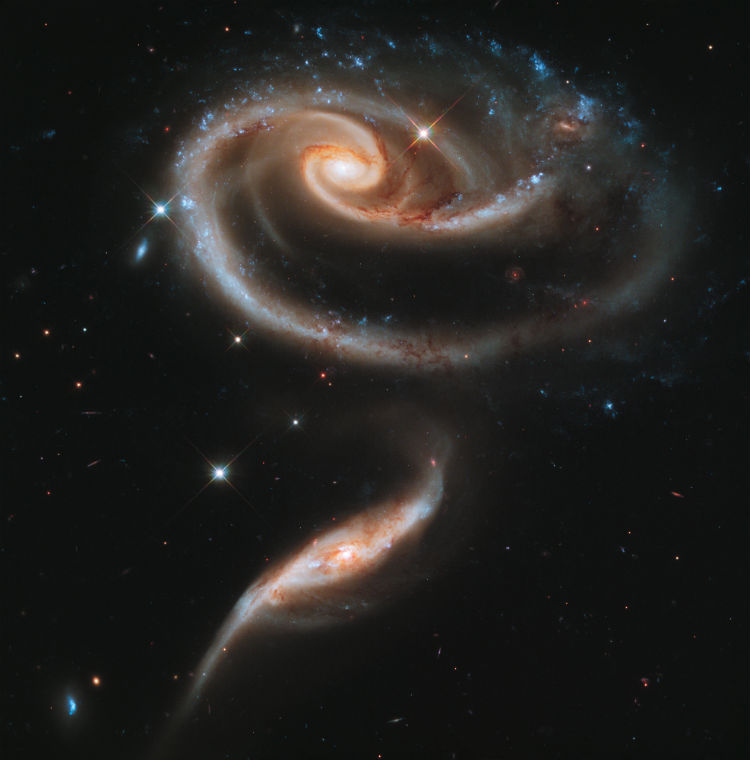 Located 300 million light years from Earth, the upper galaxy is approximately five times more massive than the galaxy below. Despite this significant size discrepancy, the smaller galaxy has stirred up quite a ruckus.

It's thought that the smaller galaxy on the bottom recently passed directly through the larger companion, causing a significant amount of turbulence in both galaxies. The after-effects can be clearly seen in the distorted arms of the upper galaxy.

Strangely enough, gravity doesn't work very well on quantum scales either. Because we use a special 'quantum physics' to describe the mechanics of atoms, we also need a theory of 'quantum gravity' to explain how gravity applies to strange conceptual objects such as electrons. We don't yet have the ability to reliably measure gravity on the atomic level, so this elusive 'quantum gravity' is still highly theoretical.

The turbulence imaged above has also jostled the clouds of gas and dust in both galaxies, sparking the rapid formation of new stars. All of the blue blotches represent clusters of recently-formed supermassive stars. As is also the case in love, when two galaxies meet, the result can be fireworks.

This example just goes to show that even a smaller galactic companion can pack a big punch. This event has left both galaxies reeling from the effects of their brief meeting.

LOVE CAN ALSO RESULT IN UNION 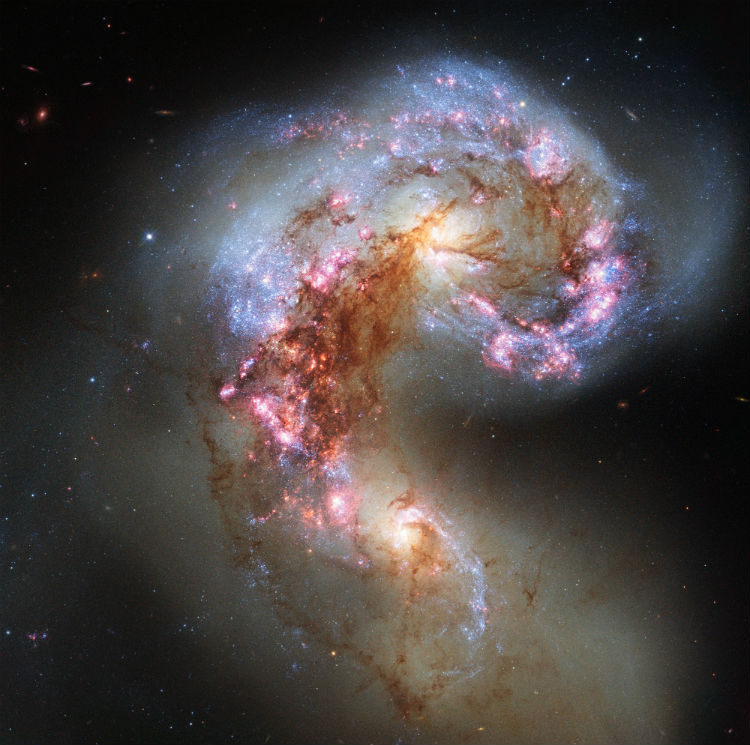 The Antennae galaxies, which will eventually coalesce to form one larger galaxy. Image: ESA/Hubble, NASA.

65 million light years away, the Antennae galaxies are exploding with activity. For hundreds of million years, these two galaxies have been locked in a titanic clash from which they'll never break free.

With this chaotic activity, these galaxies are currently undergoing what's known as a starburst period—all of their gas is being used to rapidly form new stars, as evidenced by the spectacular light show seen in the above image.

It's fair to say that the mechanism of gravity is still one of the biggest mysteries in physics. While it works extremely well to describe the motions of the objects in our own Solar System, it doesn't hold up at the galactic level (as evidenced by our reliance on dark matter), and it has yet to even be explained at the quantum level.

For the Antennae galaxies, their fate is sealed. The two closely-entwined galaxies are destined to merge in the future, eventually coalescing to form a new, single galaxy.

This is sort of like marriage on a cosmic scale—and it comes with one heck of a honeymoon. If only love could be so simple...

BUT SOMETIMES, LOVE CAN BE... COMPLICATED 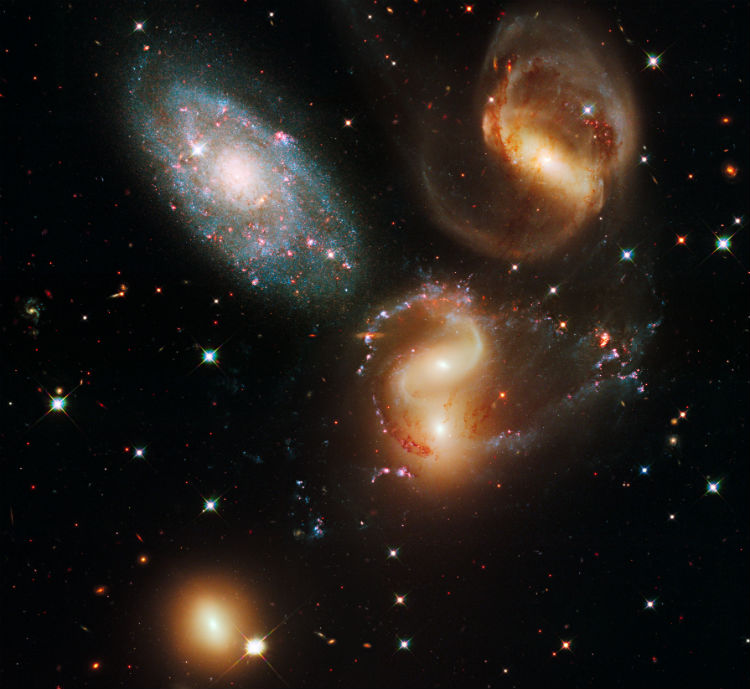 Oftentimes in love, as in the cosmos, all is not as it seems. While this image appears to show a grouping of five galaxies near one another, only four of them are actually interacting. The blue galaxy in the upper-left is approximately 40 million light years from Earth, while the other four reddish galaxies are upwards of 300 million light years away.

*Another strange phenomenon of the cosmos is the presence of what we refer to as dark energy. What we really mean by this is some unknown force that's causing the universe to expand outwards rapidly—and this expansion even seems to be accelerating. More than two-thirds of the universe is thought to consist of dark energy, while slightly less than one-third constitutes dark matter and 'regular' matter (the latter amounting to a mere 5%). *

The effects seen in other galaxies can also be seen in those of Stephan's Quintet: galactic mergers, increased star formation, distorted shapes, and so on. Only in this case, the scene appears to be far more complex.

Even in love, our universe doesn't consist solely of two individuals—there's a whole universe out there, poised to reign down chaos upon our otherwise pleasant lives.
And for our Milky Way galaxy, an unpleasant dance partner is already en route.

LOVE IS LOOMING ON THE HORIZON 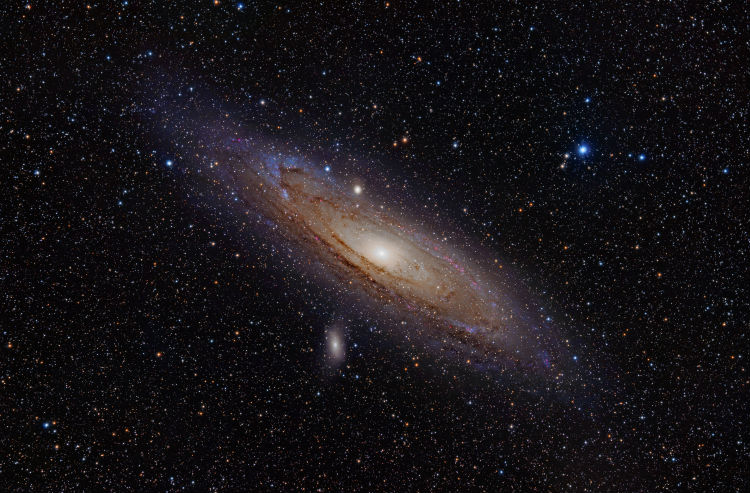 The Andromeda Galaxy is on a collision course with the Milky Way. Image: Adam Evans.

Just 2.5 million light years from Earth, the Andromeda galaxy looms. And it's getting a whole lot closer: Andromeda is moving towards the Milky Way at 110 kilometers per second. The result of this momentum is that, in approximately 4 billion years, Andromeda and the Milky Way will collide.

This unsolicited meeting will not be enjoyable. Andromeda is twice as massive as the Milky Way, and contains twice as many stars. When the two collide, interstellar gas clouds will be jostled. New star formation will peak, and the rate of supernovae will shoot up.

Extreme gravitational perturbations will eject some stars from the new galaxy altogether. Some stars might collide, causing big stellar explosions. Chaos will ensue, and Earth could be doomed in any number of ways.

On the bright side, Earth may already be doomed long before this merger happens. Within a billion years from now, the increasing luminosity of our Sun is likely to make Earth uninhabitable. Around the time that Andromeda arrives, the Sun will be swelling up into its red giant phase. If humanity is still around, we'll already be long gone—or long dead.

Like it or not, Andromeda is our Valentine. Following this collision, the two galaxies will eventually coalesce to form a new, really big galaxy. Unfortunately, we may not still be around to receive our long-awaited card.

Remember, love and gravity do share one thing in common: they only make sense under highly theoretical models and, in both cases, scientific observation may only confuse us further.