Here are Three Cool Ideas about the Aliens from 'Arrival'

Science Fiction has always embellished its portrayal of aliens with more fiction than science. But the latest alien-themed film to hit theaters, Arrival, features some of the most "realistic" aliens ever to grace the silver screen.

In case you haven't seen the film and intend to, be warned: I am going to reveal three of the central ideas in the movie. I'm not revealing specific plot details here, but these ideas are hugely important to the way the plot develops. So if you care about spoilers, proceed with caution. 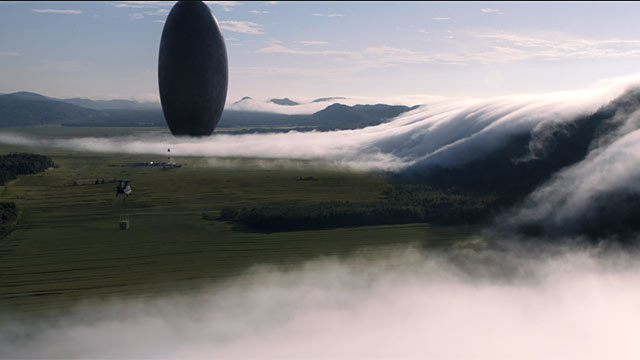 A giant alien-container appears in the sky. Image: Arrival.

These aliens aren't actually octopuses, they just sort of look like giant, creepy-looking, tentacle-toting octopus-like things (and yes, octopuses is the plural of octopus).

Octopuses here on Earth are classified as cephalopods (along with other tentacled creatures like squid and cuttlefish), having two eyes and eight tentacles. This makes them bilaterally symmetrical: the left side and right side are mirrors of one another (just as most other life on Earth is).

But in Arrival, these octopus-looking aliens are referred to as heptapods (from the Greek heptá, which means seven), because they have seven tentacle arms and a radial, non-bilateral symmetry (they don't have two mirrored sides, they have seven).

An alien tentacle appears from the fog. Image: Arrival.

This sort of biological configuration implies a very different way of thinking than we're used to. On Earth, all living creatures that possess a central nervous system (and hence a brain) are configured bilaterally. In all vertebrates (creatures with a spinal column), this bilateralism famously lends itself to a brain structured around two opposing hemispheres—the left and the right.

We know that the left and right brain hemispheres each excel at different tasks. And the communication between these two hemispheres is what gives rise to cognition and intelligence; it's an inherent brain dichotomy that enables human beings to think rationally and, to an extent, logically.

This dichotomy is present in every vertebrate, but it's configured much differently in the most intelligent species of invertebrates: the cephalopods, such as the octopus. Cephalopods have a very different type of distributed intelligence—an appropriate analogy would be that, if human brains are supercomputers, then octopus brains are some version of cloud computing.

Rather than having neurons clustered in one central brain, octopuses have neurons spread throughout their bodies—especially in their tentacles. As its central "brain," an octopus typically has a small central nervous system connected to two other neuron clusters that control each of its eyes. But 60% of an octopus' brain structure is spread among its eight tenticular arms.

In fact, an octopus' central nervous system has no direct motor control over its tentacles, so they sort of act independently as mini-brains. The central brain can only issue behavior commands, which its tentacle-brains then execute the finer details of by their own volition.

Here's a brief video from TED Ed detailing how this process works:

This distributed neural structure looks like an internet of brains, and it's a completely alien concept to the way we typically think about cognition and intelligence. They're really, really smart. But they're also a very different kind of smart, and they possess a unique approach to problem-solving, tool use, and navigation.

Human beings are much more closely related to every mammal in existence than we are to the cephalopods (our last shared common ancestor lived over half a billion years ago).

But, even with their eight tenticular arms, octopuses are still configured bilaterally—they possess left and right hemispheres for their eyes, and they're technically considered to have four pairs of tentacles rather than eight individual ones.

In Arrival, the heptapods don't fit into this binary model of symmetry, which is unlike anything we have here on Earth. Rather than having two equal hemispheres communicating back and forth with one another, the implication here is that the heptapods would have an odd-number of seven brains engaged in an ongoing conversation.

This would be a very odd thing to see occur naturally, but it could be post-natural. It could be an intelligently selected trait, a way for the heptapods to unlock some next level of consciousness or cognitive ability. A genetically-modified intelligence. 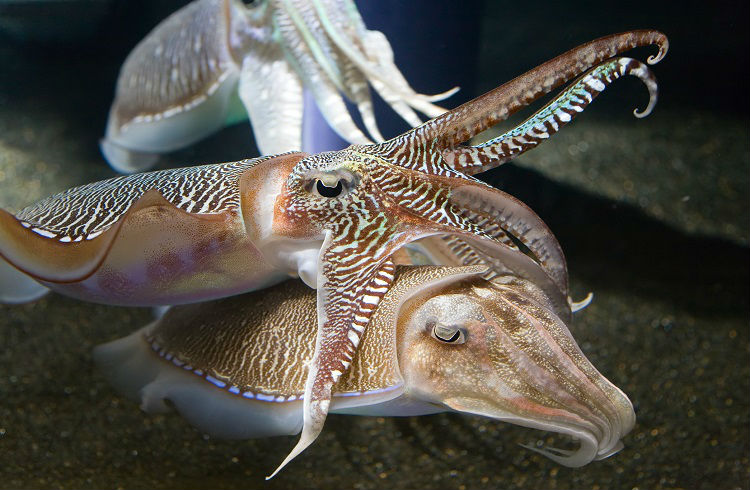 Whatever the case, the implication here is that they think a lot differently from us. And that's an important thing to consider in the field of interstellar communication. Why do we think that it would even be possible to communicate with another species, or that their version of logic would in any way resemble our own?

This is a radical departure from the typical anthropomorphic English-speaking aliens that are portrayed in a vast number cheesy Sci-Fi films. There's a good chance that any aliens we do encounter out there won't resemble our biology (maybe they won't even be considered 'biological') at all. And if their biology is different, what would their language look like—and, more importantly, would they even have language at all?

Spoiler #2: The Aliens Have a Magic Language

We don't need to search very far to find real-life examples of what communicating with aliens might be like. We have plenty here on Earth: whales, dolphins, octopuses, orangutans, bonobos, chimpanzees, gorillas, elephants, and the list goes on. But do any of these animals possess language? 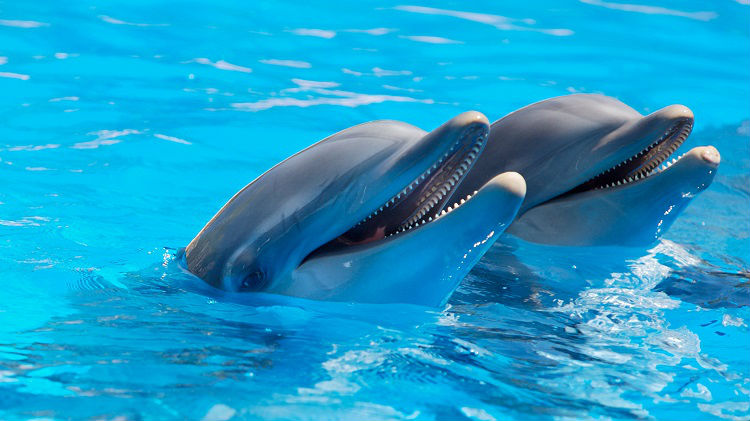 One day, dolphins will be considered 'water-people' and have legal rights. But they'll forever be the clowns of the sea. Image: Hamid Elbaz.

Ongoing research continues to show that communication is a fundamental trait of complex life here on Earth, and that many of the more intelligent species that we share this planet with do have, in some cases, something that resembles a language.

Studies of dolphins continue to reveal what appear to be language patterns in their clicks and whistles. These findings are considered inconclusive and controversial, though, and no scientific consensus has yet been reached.

Another example is Cornell University's Elephant Listening Project, which has created a database of elephant communication sounds and identified patterns that resemble those found in human conversations. Elephants are already known to possess highly robust memories and exhibit complex social behaviors above and beyond other large land animals, so is it much of a stretch to think that they may possess some sort of language as well?

We also know that the great apes, such as chimpanzees, communicate largely through body language signalling (and therefore make perfect candidates for learning human sign language). Experiments have shown that chimpanzee intelligence matches approximately to that of a three-year-old human. But these are testing specifically for human-like intelligence, so there's an automatic bias. Would we do much better testing humans for chimpanzee-like intelligence?

Similar body-languages are observed in cephalopods, such as squid and cuttlefish, who are able to communicate with one another through rapidly changing colors and creating complex patterns across their bodies. Some squid are even able to communicate different color patterns to two different squid simultaneously.

Similarly, bees communicate to their peers through performing a dance, providing the hive with information about where to find pollinating plants—all through body movement alone. Whether either of these could constitute some sort of complex language system is yet to be understood.

In Arrival, the heptapods communicate using complex ouroboros-looking symbols. Each symbol can be deciphered as a sentence, and even a slight change in any given symbol can completely alter the meaning of the sentence.

They're conceptually similar to the symbols of Mandarin Chinese, where each symbol is linked to a distinct word, and combinations of symbols create more complicated words. But in the case of the heptapods, they have one symbol for every possible sentence that they would want to convey. This makes comprehension exponentially more complicated. 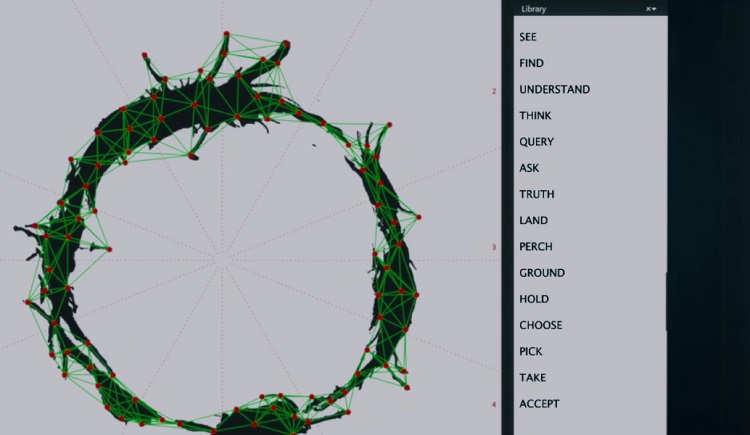 This is the writing system used by the heptapods. No, not complicated at all... Image: Arrival.

Comprehending this sort of language requires an alternative cognitive framework. This film takes the Sapir-Whorf Hypothesis, that the structure of a language influences one's experience and cognition, to the extreme. As the main character embarks on her journey of learning this alien language, she begins to perceive the world much differently—even a phenomena as fundamental as time begins to get a little wonky.

Perhaps we Earthlings take the linear arrow of time for granted. But to underscore how fundamental the difference in cognition between ourselves and any possible aliens may be, just imagine that an alien species had a completely different perception of time than we do.

In Arrival, the heptapods experience all time simultaneously. That is, they see the future, and the knowledge they gain in the future can be used to affect their present. Past, present, and future all become trivial—like separate rooms in a house, a heptapod can move freely between them at will.

The implication here is that learning the heptapod language effects cognition to such an extent that this time-travel ability becomes possible for everyone who thinks in the heptapod language. This allows the hepatapods and any intelligent species that learns their language to exist in a new reality that's completely unhinged from the bonds of linear time progression. 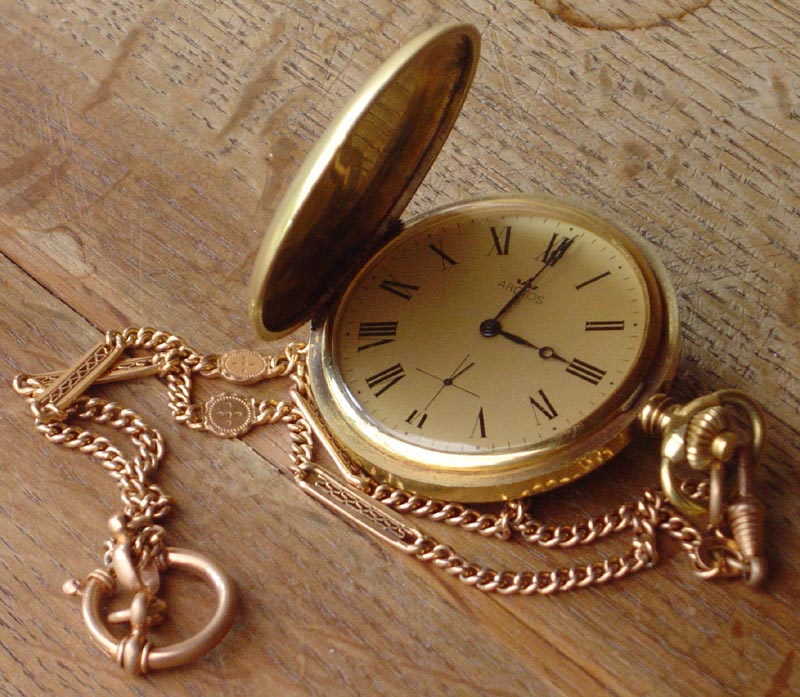 If we could think like a heptapod, we would gain the ability to move back and forth through time as easily as we move between rooms in a house. Image: Isabelle Grosjean.

This is a great Sci-Fi innovation, but one that breaks an awful lot of physical laws. Unless there's some hidden mechanism involved, there's no way that learning a language could unlock some ability to perceive one's entire life—past, present, and future—all at once.

There's no reason to think that time needs to be perceived linearly by all agents. Perhaps it's important for basic cognition that a logically consistent perception of time is retained. But when evolution is eventually taken into our own hands, that may not remain the case—we may prefer to perceive a world in which time flows in alternative ways.

Obviously, this time thing is an extreme example. It would have been far more compelling (though perhaps of little entertainment value) if human beings and heptapods had, no matter how long they tried, never been able to communicate with one another. Because that's sort of the way it is on Earth right now.

SETI is on the hunt for signals from alien civilizations. But what exactly are they hoping to find? Some message in a language that we can understand and decipher? What if these aliens think so fundamentally differently than we do that we can never decipher their seemingly non-sensical message at all?

This is a question that should be addressed. And perhaps before we spend a billion dollars attempting to talk to aliens that may or may not even exist anywhere near us, we should figure out a way to have a basic conversation with the dozen or so other intelligent species that share our planet. Just a thought.