There's a bunch of awesome technology that Star Trek's Federation has that we don't—some of which seems downright impossible, all of which is just downright awesome. And that's really, really sad, because Star Trek makes space look really, really cool.

Here are five of those things that we really, really need to have if we ever space exploration to look as cool as Captain Kirk and his friends make it look:

Star Trek: request and you shall receive. All you need to do is talk into the device and request exactly what you want and—POOF—it will materialize like magic, cutlery and all. The on-board computer knows every dish in the galaxy and can change any aspect of a recipe on request—all in a matter of seconds. So yeah, if you want a dog-poop flavored batch of cookies to prank your friends with, go nuts.

What the heck is going on here? Where did they get space turkeys from? Image: Star Trek VI: The Undiscovered Country (1991).

Reality: space food is freeze-dried and shipped up to space from Earth, either along with the human crew (Apollo and the Space Shuttle missions) or as part of regular re-supply missions to the International Space Station (ISS). A team of chefs on Earth is responsible for creating new recipes and evolving the menu in response to on-orbit feedback. In addition to this, astronauts have begun experimenting with growing food in space, a capability that may become vital if human beings are ever to embark on a six-month one-way voyage to Mars.

How we'll get there: there's a lot of room for improvement with regards to growing food in space (so far, only lettuce has been grown and eaten). But beyond that (pun intended), molecular 3-D printing will eventually be able to create food from scratch by using its basic chemical components—sort of like Star Trek's food replicator, only mind-numbingly slow. And that's okay, because in space, everywhere we want to go takes a really, really long time to get to.

Star Trek: a type of propulsion that allows humans to zip across the galaxy at ungodly speeds (many, many times the speed of light) and doesn't even need to stop to refuel. Wow, they really put the science in SCIENCE Fiction with this one.

Reality: we still live in an age of chemical propulsion—rockets that shoot fire out of their butts in order to make things fly in space. NASA and other agencies are currently developing solar-electric ion propulsion that's at least 10 to 20 times more efficient than current chemical propellants, but these have only been built at very low thrust levels and deployed on relatively light probes. This technology is on the horizon, but doesn't have enough thrust to work on a crewed spacecraft.

How we'll get there: at this point, warp drive isn't even on the radar. This technology would require the ability to expand, contract, fold, and roll spacetime like dough—a great method of getting people from point A to point B in Science Fiction narratives, but not very practical.

Calculations have shown that this type of spacetime manipulation is theoretically possible but would require more energy than our sun is capable of producing throughout its entire 10-billion year lifetime just to get a few molecules across the Milky Way using a warp drive. The one problem? Carrying a few solar-masses worth of energy with you just to get a few molecules across the galaxy seems really, really pointless. Besides, in a future with virtual reality, will we ever even need to leave the house?

Star Trek: a Holodeck and lots of planet-hopping looking for alien babes. 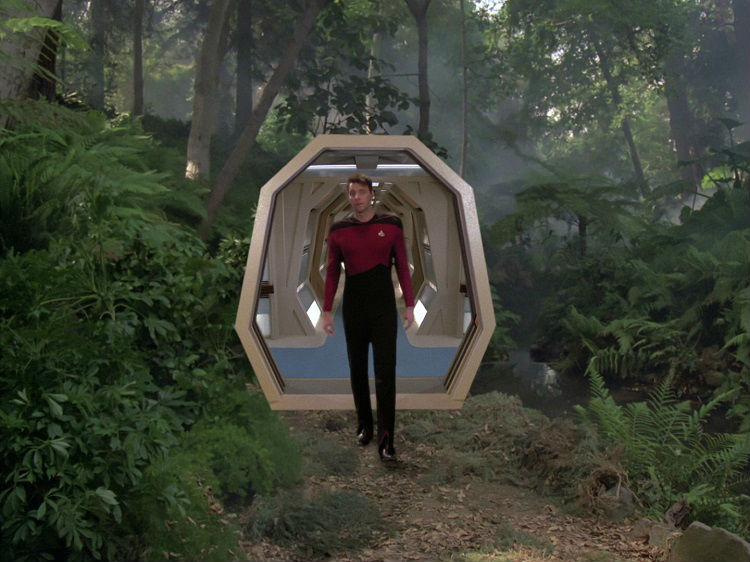 Clearly the beginning of an 'adult' VR program in the 24th Century. Image: TNG: "Encounter At Farpoint" (1987).

Reality: astronauts on the ISS are isolated in cramped quarters and forced to use exercise equipment in a cramped room for two hours every day in order to try and prevent degenerative bone and muscle loss to due to lack of gravity. If that doesn't sound like enough fun, they also get a few hours of free time each day where they can either look down upon Earth from orbit or use their personal laptops with a crappy internet connection to sort of keep in touch with what's happening down on Earth. Apart from that, space is lonely.

How well get there: virtual reality technology has been tested on the ISS, and in the near future it will probably become a staple of astronaut 'recreation' time (and everyone else's, for that matter). We won't need to use an entire room to simulate an alternate world if the entire world can just play out through a pair of virtual-reality goggles and a tiny bit of imagination.

And as an added bonus, VR goggles will make those two-hour sessions on the space-elliptical feel like you're actually riding a bike back on Earth. Yay...

Star Trek: every vessel, big and small, is equipped with some kind of artificial gravity machine. Even more amazingly, this machine seems to work forever—even on a derelict vessel that's floating in deep space completely devoid of power. Moreover, 100% Earth gravity appears to be the standard at all times, no matter where you travel. And that's a relief.

Everyone: so happy to not be floating around in micro-gravity. But are they really? Image: Star Trek VI: The Undiscovered Country (1991).

Reality: no attempts have been made to simulate artificial gravity in space, despite the known health concerns that arise as a result of long durations in micro-gravity. These include: increased blood flow to the head, vision problems, sinus congestion, and, worst of all, rapid loss of bone density and muscle mass.

How we'll get there: creating artificial gravity in space is actually a simple process. The Star Trek method doesn't make any sense (with regards to physics as we know it), but other films have depicted spinning sections around a central point as away of creating gravity in space. The effect is exactly like filling a bucket with water and spinning it around rapidly—no matter whether it's upside down or sideways, the water will remain in the bottom of the bucket as a result of momentum.

There have been proposals for tethering future Mars-bound spacecraft to some sort of ballast and having the two linked pieces spin around one another. The longer the tether, the less spin would be required in order to create the effect—and even 10% Earth gravity would be far better for astronauts than none. And yet, this method is not being employed anytime soon. And that sucks, because bouncy castles in low gravity in space would be really, really wicked.

5. A DIVERSE CREW THAT INCLUDES ALIENS

Star Trek: The Original Series was groundbreaking in its diverse cast. Further Star Trek installments have continued to push that diversity by including a range of alien species as part of its standard crew—a crew which now more resembles a college dorm than it does a team of professionals working on board what is arguably the most technologically advanced machine ever built (the U.S.S. Enterprise). 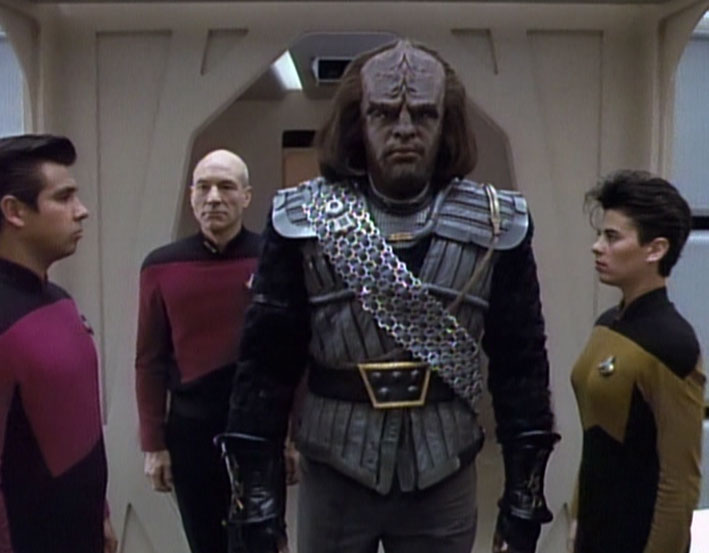 Reality: astronaut crews are only as diverse as the international partners that collaborate in space exploration—which is generally restricted to developed countries with a very high GDP. Further, the type of individuals recruited to become astronauts represent a very elite group of human beings with very specific traits and skills. A typical career path is generally: years of distinguished Navy or Air-force service (usually as a pilot), followed by a few dedicated years as a test pilot (one of the most dangerous jobs in the world), and finally the completion of NASA's stringent recruitment process.

How we'll get there: as the space frontier continues to open up, scientists from a variety of different fields will start being recruited for their highly specialized skillsets. Plus, we might one day find aliens—and they might be friendly—and they might be culturally similar to us—and they may even speak our language—and then they could fly in space with us. And we need that, because the people who fly in space with us right now—that is, regular humans—are all boring-looking and don't have bright green skin at all.

Can you think of any more awesome Star Trek stuff that we really need to have for space to be as cool as it looks on the U.S.S. Enterprise? If so, leave it in the comments below.