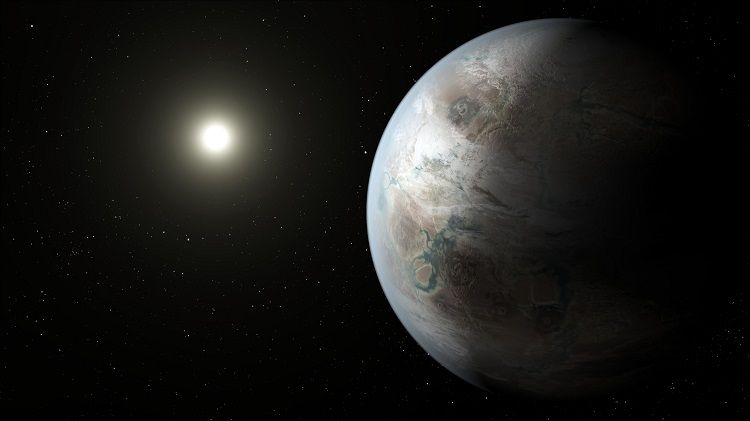 Meet Proxima b, the Closest Exoplanet to Earth

Two weeks ago, Earth was introduced to a previously unknown distant relative: Proxima b, an exoplanet in orbit around the closest star to our own Solar System, Proxima Centauri, 4.243 light years away. That's just over 40 trillion kilometers. That's over 2,000 times further away than the most distant man-made object, Voyager 1, which has been traveling away from the Sun since 1977—39 years of spaceflight, 0.05% of the distance to Proxima b.

At that rate, it would take over 80,000 years to reach Proxima b—if Voyager were even headed in that direction (and if Proxima Centauri stopped whirling around the galaxy at hundreds of kilometers per second). By comparison, it took New Horizons ten years to reach Pluto which, at five billion kilometers, is the furthest object ever visited by a spacecraft.

And yet, as it typically goes, we'll soon be mining this newly discovered planet for its most precious resource: not oil, not gold, but information. 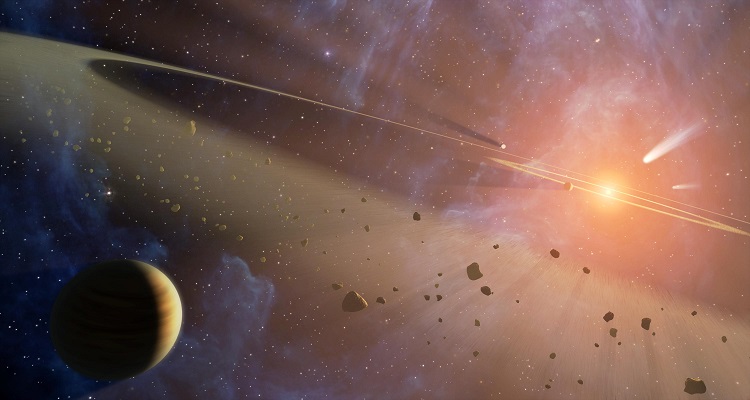 An artist's rendering of an exoplanet around another star. Image: NASA.

Sure, there are billions of potentially habitable exoplanets in our galaxy alone. But we lucked out here, because Proxima b is close. Really close in interstellar terms. But still really far away in terms of interplanetary distances, which we still haven't quite mastered.

Lucky for us, we have big telescopes. And some even bigger ones coming online within the next decade—probably big enough to capture a few pixels of light from Proxima b itself. For some time, that's the best we'll be able to do. But when humanity eventually does go interstellar in the xxth century, Proxima b will be the most natural of first destinations—as natural as was going to the Moon prior to attempting the long-haul journey to Mars and Venus and beyond.

IMAGINE EARTH HAD NO MOON.

Imagine that Earth, like sister Venus and brother Mercury, had no moon at all. In this scenario, our first astronauts wouldn't have had anywhere to go—the Apollo program would never have existed, and we'd probably still be debating whether or not it were possible to build a rocket big enough to take humans to Mars.

Or, what if, instead of having a Moon with a diameter of 3500 kilometers (approximately the distance between France and Moscow, or California to Florida) and 1/6th Earth's gravity, we instead had a moon similar to that of Mars' largest moon—22 kilometers in diameter (about the length of Manhattan) and with such low gravity that a good jump would carry an astronaut right off into space.

It would also be really hard to orbit such a small object, and even more sketchy trying to land on it (remember how Philae, while trying to land on Comet 67P, bounced?). And if astronauts ever did land, they would need to remain tethered to the spacecraft all times, lest they float away into the cosmos. So much for off-roading on the lunar surface.

Proxima b may become humanity's stepping stone into the cosmos. Image: NASA.

Having either no moon or a mini-moon would have presented a less-than-ideal scenario upon which to direct the effort of our civilization's flagship human spaceflight programs. The U.S. probably wouldn't have invested 10% of its federal budget during the 1960's to such an endeavor. Instead, the U.S. and U.S.S.R. would probably have spent all that money on bigger and badder nukes and then, as I suggested, we might all be dead—or at least living in the real-life version of Mad Max or The Road.

Instead, we lucked out with our gargantuan Moon. That gave us a place in the cosmos, other than Earth, to explore and step foot upon. And having that sanctuary may have saved us all, or at least temporarily delayed the inevitable doomsday scenario of global nuclear war. And that's why we're also lucky to have Proxima b.

IMAGINE THERE WERE NO MARS.

We also got pretty lucky with Mars, so lets try another one. Imagine if, instead of having a red, dead, and possibly previously habitable world to explore right next door, we instead just had empty space. Or a little asteroid-sized rock. That would have made it really damn hard to develop and use robotic rovers to explore other worlds (considering Venus and Mercury are both hell-holes).

In that scenario, our understanding of planetary science would be far less. Some of the incredible things we're learning about Mars apply to Earth and other planets as well. In comparing the differences between planets in our own Solar System, we can begin to understand what exoplanets in other star systems might look like, as well as answer fundamental questions about why Earth is the way it is. Without our intensive study of Mars (and our dreams of colonizing it), we may never have looked for exoplanets like Proxima b.

Without our gargantuan Moon, Mars would have been a lot harder to explore. Lunar landings and vehicles enabled eventual Mars landings and rovers; if Mars is our goal, then the Moon serves as our stepping stone. It's because we have the Moon that we got to learn fifty years ago that space is really hard—but we also learned that it's just hard enough that it we can still overcome its technical challenges.

The learning curve without the Moon would have been much steeper and, if we were to try sending humans to Mars without first venturing to the Moon, much deadlier.

And of course, without Mars, we would have no destination. No big goal. No Curiosity rover. Space visionaries like Elon Musk see Mars as a sort of lifeboat for humanity—in case Earth goes defunct, the human race can continue on Mars. That's a little far-fetched, and maybe he just says that in order for the general public to more easily digest, because there are many other compelling reasons to expand our civilization to Mars beyond just the survival of our species. 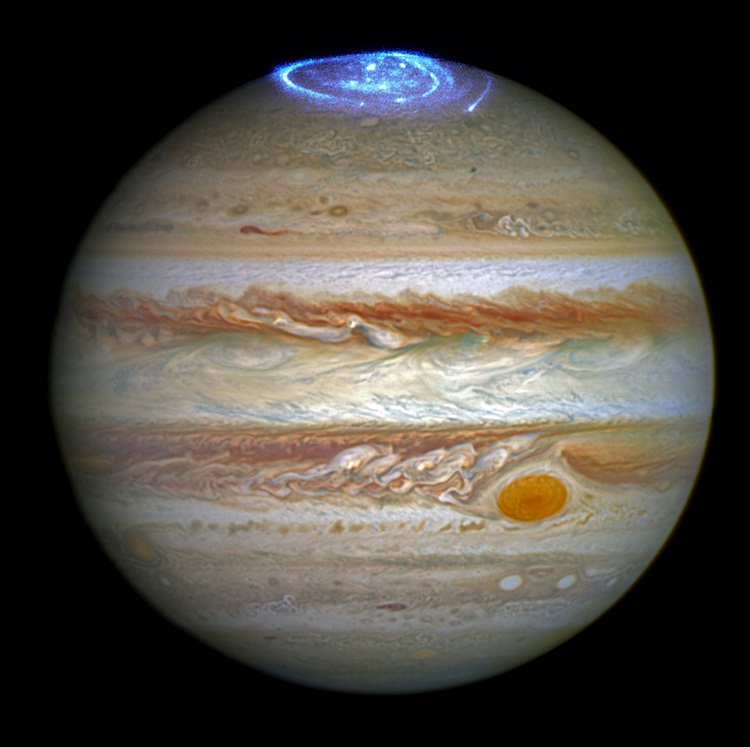 In some ways, we get the best views of Jupiter from Earth. Image: NASA/ESA/J. Nichols.

Just as we're lucky to have had the Moon, we're lucky to have Mars on our horizon. NASA wants to land humans there in two or three decades. And we need that platform to step foot on before we launch out onto the cosmic, interstellar stage. It'll take the resources of many planets to propel humanity to other star systems. If we ever get there at all. And if we do, the location of Proxima b will come in handy.

NOW, WE HAVE PROXIMA B.

The Moon pushed our human spaceflight program forward. Mars pushed our study of planetary science forward. Now, Proxima b will push the field of exoplanet science forward. Combine those three, and we have a recipe for humanity's future—a natural progression in which we gradually expand outwards from Earth and into the cosmos.

Until we finally do send robotic probes or human beings out of the Solar System, Earth-based observations will look at Proxima b. It will become the most studied exoplanet of all time (at least until we discover clear bio-signatures on a different exoplanet). And that's because it's the nearest one ever discovered, and the nearest that any of them will get for quite some time (our interstellar neighborhood gradually changes over time—some stars move out, others move in, etc). 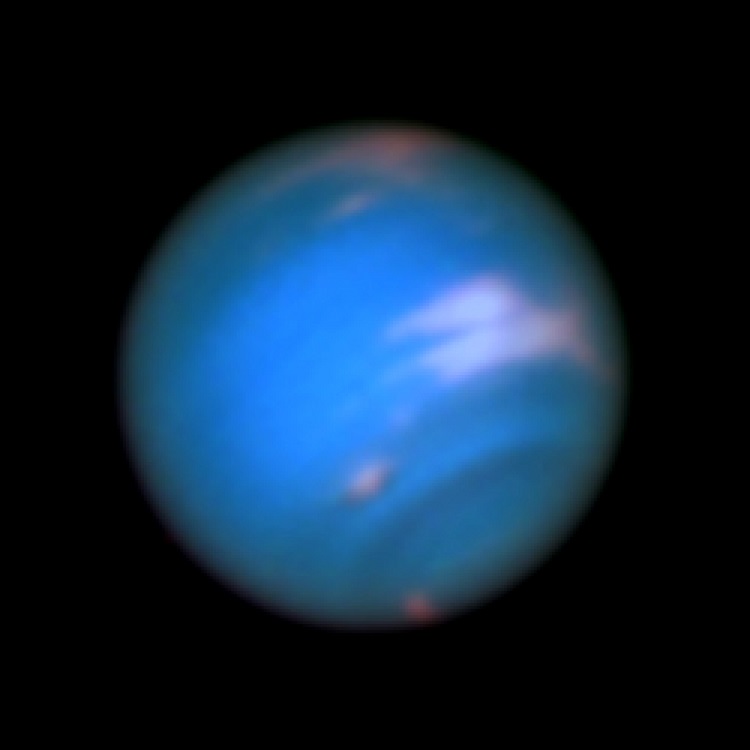 It'll be a few more decades until Proxima b looks as crisp as Neptune through our big telescopes. We'll get there. Image: NASA/ESA/M.H. Wong/J. Tollefson.

This is important, because the closer an object is to Earth, the easier it is to study through a telescope. Proxima b is close enough that we should be able to directly image it with telescopes within the coming decade or two. Without physically sending a probe to investigate, this is the best way to study planets. We use Earth-based observations to look at objects in our own Solar System the vast majority of the time—it's very rare that a planet in our own Solar System actually gets a visit from one of our spacecraft.

IF WE DON'T SELF-DESTRUCT, WE'LL GET THERE.

If we hadn't had the Moon or Mars, we probably wouldn't be sending humans anywhere, ever. Our future is largely shaped by the situational opportunities presented to us. The Moon presented the opportunity to win a space race / Cold War / battle of ideologies. Mars presents an opportunity to study how a previously habitable world can become inhabitable (you know, that climate change thing). And Proxima b is another such opportunity. We're lucky to have it.

Making detailed observations of Proxima b will probably take innovations and advancements in methodology and technology alike. And once we're able to determine its characteristics, we'll be able to take those same method and technologies and apply them to more distant exoplanets. 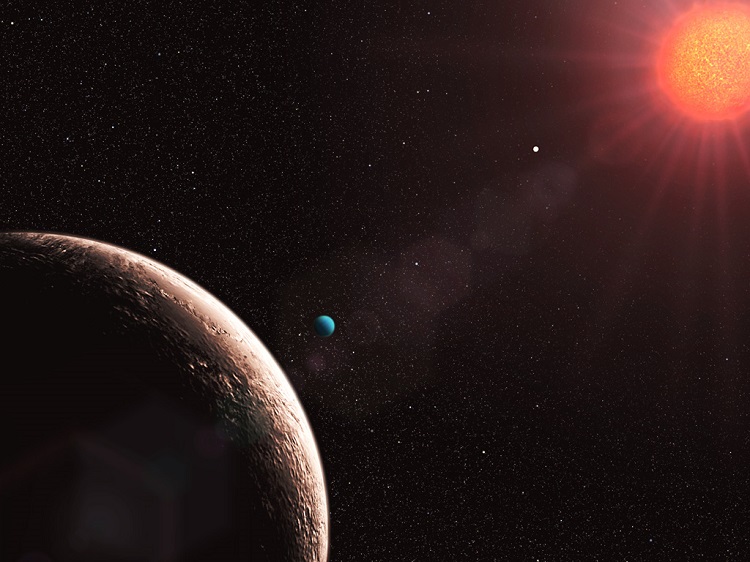 For now, Proxima b is just a pale red dot. Image: ESO/L. Calçada.

Things only get better from here. We'll probably never reach Proxima b within our lifetimes, but having this nearby exoplanet as a sort of discovery calibration tool may soon lead us towards making a discovery that shakes our world. Some future generation will leave the first bootprints, but our generation will get to do the initial trailblazing.